Band-Aid Updated and Released for Windows 10

First off, wow it has sure been a long time since I last posted on here. Going to try to fix that with more frequently updated content, maybe something out weekly and see how that goes.

So as you can guess, Band-Aid has been updated! And it has been released for Windows 10 as a Universal app.

Today we are looking at the release of version 1.5.6 and what’s new since the last post. Of course, there is improved stability and performance and bug fixes and any other generic change log items that people usual say. So what’s cool? We have added support for the Microsoft Band 2 for Windows 10, sorry Windows 8.1 folks but don’t worry support will be coming very soon. I promise 🙂

Another cool feature, at least to me, is a new alert which lets you know when your phone is low on battery. You can specify the percentage for when you would like to receive the alert, for example when your phone drops below 10% push out an alert to your Band to let you know that you may want to charge your phone.

The design for the app has also changed slightly, there is now just the left pane with the main app sections, versus that weird left/right pane, which unfortunately still exists for Windows Phone 8.1, again sorry guys but you can always upgrade at any time to Windows 10 by joining the Windows Insider Program.

Suppose I should talk about the Android and iOS versions of the app too before wrapping up. So they are still totally happening, it’s just been a little challenging with some of the other projects that had to take priority. Believe me, it’s a lot harder to start a new project than to update an existing one. (In case you were wondering why there have been updates for Windows and nothing yet for the other platforms.)

That’s mostly it for now, there will be much more coming soon. And please check out the new update for Windows 10 below:

Thanks for reading and as always, stay tuned!

Hey everyone! I’ve been working on something pretty neat for the past few months, Band-Aid! Currently it’s released now for Windows Phone, but soon to come to Android and iOS.

Band-Aid is an awesome app made to make the Microsoft Band even better and aims to bring in more features for both the phone and Band! It has two main features for right now, “Battery” and “Move It”.

So let me go ahead and tell you a little bit about Band-Aid 🙂 starting with the two main features:

– Battery – lets you quickly see your phone’s battery percentage on your Band by either making the theme of your Band change color based on the percentage level of your phone and displaying the actual number within a tile on the Band. It’s pretty cool 😉

– Move It – lets you set a reminder for how often you should be told to get moving when you’ve been idle for too long. Very useful for those of us that sit in an office throughout the day :\

There are a ton of other features that I’m planning on releasing soon and also make the app available for Android and iOS. Stay tuned!

Just about a week ago now we launched an all-new version of our Dev Diary app for Windows Phone to replace the existing (unstable) version that was made by FollowMyFeed.Net (which appears to finally be down, so great timing huh?)

From the last post about the status of the Dev Diary app, we mentioned that it was going to be made from scratch, from the ground up. So you’ll noticed the UI is much cleaner and simpler, and it should show the direction we are planning to go with the app.

Also I would like to announce Dev Diary for Windows! Yup, you know that means, Dev Diary has been turned into an Universal app! The best part of rebuilding this app has not only been able to take advantage of some of the cool Universal app projects but also to provide better quality and better features.

So look out for more updates in the future as we continue to enhance the app.

Oh boy, the long…very longly anticipated update for Weather Livepaper is finally in development. Mainly to swap out its current use of the now gone, Google Weather API which was used to power the also gone iGoogle home page.

What are we replacing that wonderfully gone API with? Well..OpenWeatherMap!

It really has been a long time coming and I do feel terrible that the state of the app has been pretty unusable for almost a year :X but this change isn’t the only thing I’m planning on releasing for Weather Livepaper. There is also a new feature and some bug fixes that were very much needed too 🙂 and with this update I also plan to try my best to keep the development going.

So look out for the update to be released within this week (which I know is almost half way over already), there will be an announcement soon though once the update is officially out.

More to come so stay tuned!!

Dev Diary app produced by FollowMyFeed.net has been updated!!

This update actually went live about a week ago, just wanted to announce some of the things we were hoping for in this update.

Seems FollowMyFeed does not support Windows Phone 8 or newer, that being said this is probably the last update from them that we will release.

I’m currently looking into developing our own reader from the ground up so that we can provide better support and quality and not have to worry if a third party is keeping their service up to date.

All that said, we were able to at least update the app with up to date assets so it looks much better and current 🙂 Development these days have been, what’s the word, “hectic”. Just wanted to announce a couple things and share some of the new games lined up for this year, briefly.

The first item up, Venti20! What’s Venti20? Well to put it simple, its 4 weeks, with 3 hours a day, all dedicated to a gaming project. Within that time, I take an idea and bring it to a proof of concept or prototype stage. Depending on how awesome or how well it goes, the game can then go on the production line-up in which development is continued and the game is ultimately released! But why is it called Venti20? Another good question, venti actually has nothing to do with 20 at all, its just a fun word I’m using for “venting” since the idea is to drop development all together on production projects and focus primarily on something special. And 20, for the 20 days (4 weeks, not including weekends, I need to relax at some point I guess). So what’s on Venti20 this time? An Indie Game! Yup, the all-new An Indie Game….game. Let’s just say there is a major redesign for it.

And now a quick line-up of what’s to come in the next few months here:

So much more left to mention, but that’s the general snapshot of things to come. 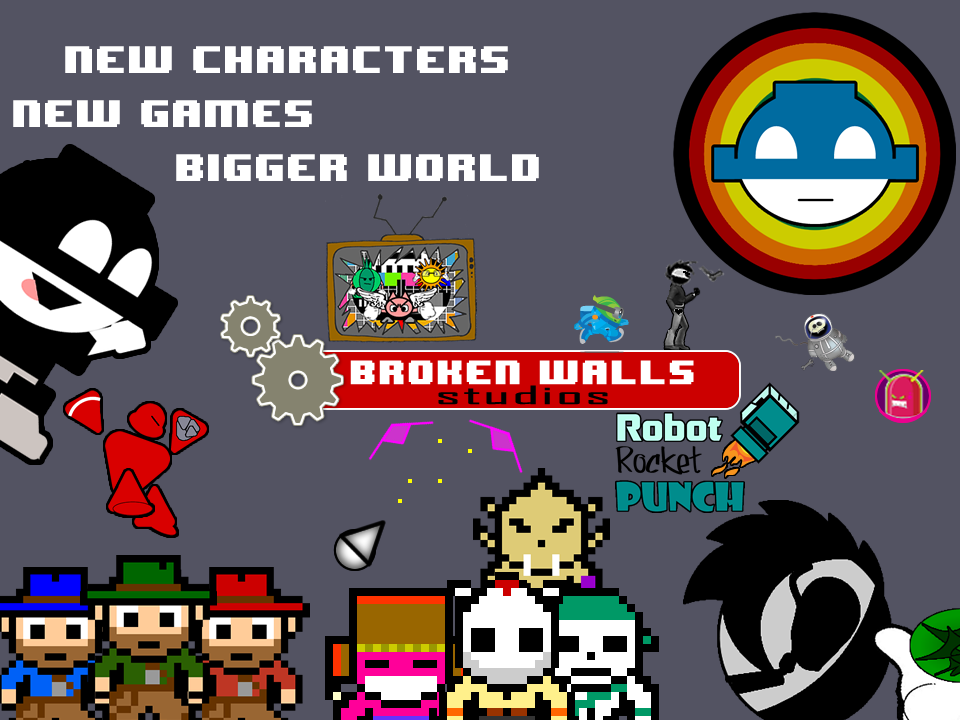 Coming Back and Packing!

I’ve been hard at work for the past few months. There was actually suppose to be more characters in that image but we ran out of space.

Some exciting news to share real quick, Broken Walls Studios now has a new division, Robot Rocket Punch! (which is going to handle game for the most part)

This year is going to be a big year for us here and as you may notice there are some new additions to the roster of game characters.

There will be numerous announcements of new games releasing within the upcoming months, and along, of course, new web site enhancements! For example, the new Dev Diary section, which you are currently visiting if you are reading this 😀

There will be an un-dev related blog strictly for all news regarding BWS and RRP, more on that in the coming days…in fact more details on everything else in the next coming days as I try to break the, I don’t know, four or five month silence we’ve had all this time being busy.